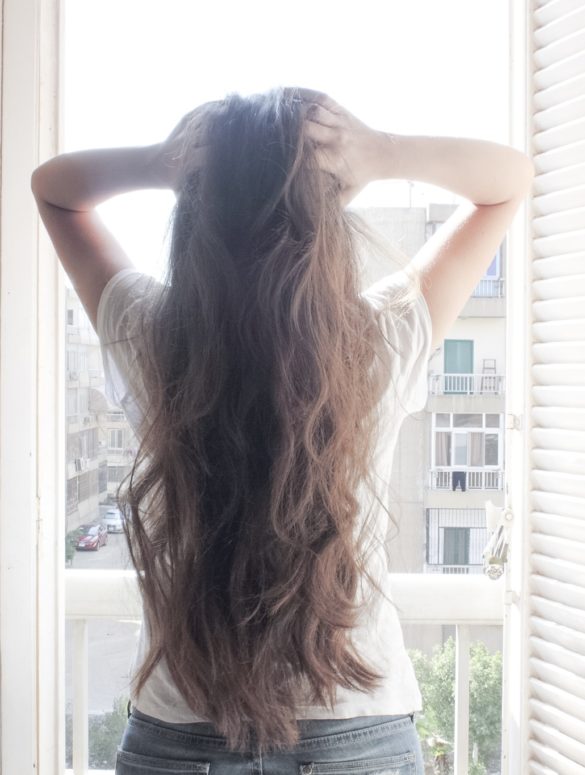 I’ve known “It” since forever, he’s the best companion, always got my back, but we became serious in the start of my freshman year…

When I was in college, I treated it in a way that I thought it’s perfect for it, straightening it with natural waves look that took me two hours every 3 to 4 days and 10 min. every morning for touch ups, that was me taking care of it, or that’s what I thought back then, I treated it like the way I wanted to be treated, with care and love, I wanted it to be the best in the world.

But I never thought that it wants acceptance.

After 5 years of telling it how to be cool, effortlessly waving behind, flipped over one side —that I knew afterward that’s not the good side of the face to reveal— it begins to resent me, and turn off.

Without any explanations, it begins to lose its normal texture, frizz more, breaking its ends and I know deep inside that in some point in this years, it wanted to leave my scalp.

When I didn’t have the 4 hours per week to make that much caring, I let it go on its curly own direction, Everybody loves it this way (girls) and everybody hates it (boys) and preferred the beautified version. Does it matter to mention? Maybe. Because if you have that power, you’re gonna use it, so I wanted more, more of whatever that was.

Right after graduation we broke up, I was in my phase of – I don’t know was it depression or discovering in a very dark way- I totally forgot that it was there, I didn’t give care or anything for that matter, and it didn’t give me appearance, support and devour security that I had from it.

I forgot how it feels to look fresh, feel the air in a newly blow dried fresh scalp, like I said before, it’s like when a man starts to grow his beard, I instead grew my tufts.

I didn’t think of it, it was there and not there, I knew it won’t leave me completely but I thought I didn’t need it and I can be on my own, it was always on a unbrushed top knot, all I’ve noticed that it got desperate as well, and started to grow some grey that was growing everywhere without any consideration of the fact that I’m already losing some of my confident behind not showing my head the way it supposes to look and feel.

I started to think about myself with it, I’ve always been attached to it, or it to me, I never thought it was a bad thing, but I never knew anyone else to even know that, I was always Passant the long hair Blondie* gal. It was my ultimate signature that never goes out of style, we had that attitude together that everybody fell in love with, it was effortless that never been dyed, and cool that follows the trends that she thought was good for both of them. I was always taking to account to never hurt it so much, I knew that it had feelings, and if I damage it, it’ll never be fixed, I was subtle about our changes, and we learned some lessons from it as well, like bangs ain’t for us, even if you have Frija’s forehead, you can’t have her texture, so we was waving in choices and chances. But at this time, I choose to make people forget about us, it was only me, and I personally forgot that I even have a head.

Due to my strong love for it in feelings but the failure in delivery, I started to think about second chances, and what’s the best way for us to be lovers again, after all, when you think about it, I always had this emotional connection when it comes to It, I never cheated on it —to consider the possessive idea of what it feels like to have a pixie one day and I appreciated it’s long thick attitude— one day, and I made that promise to it, (to cherish and support, in sickness and in health) but for me to make that long-term relation last, I have to build the base again, starting with trust, acceptance, appreciation, approval, and admiration.

In the first part of trusting, it revealed the both sides that it has, and wanted to change by itself for the better, and me trusting that’s it’s the best for it, and both of us.

So in what shape you wanted this relation to taking its route?… Pop? pixie, relaxed? Just natural!? Inside and outside revealed to the world, without any complications… RAW.

But How raw? Are we going to be blind about the bad parts and leave it there? Or start with a new fresh phase, without any denying that the bad parts are from our past of our relation that without it, maybe we never gonna be here now. Do we have to forget about it and cut it, or deal it with it, how bad is it to leave the breaking parts hanging there without any solving? I’m afraid that I lost connection with how hippie it looks now and how days change it and forgot to take me to the same path… Should I run after it? All the people are seeking that extended length in their relationships with their Its, and here it is, fully extends its arms, I had it all and I’m confused.

With baby steps, I started to introduce us together again to the world, Coconut oil was our best friend that we share all our secrets with, and people started to notice us again, like a free two love birds. Although we were unconditionally in love, and how I appreciated it struggles with me through the years, I wanna leave the past to go behind in the perfect sense for both of us, and I’m willing to look at the bright side and get rid of the worst, and to add freshness to our unconditional love affair, because adding this ingredients is the key to sustain a healthy relation, in the same time I will consider it’s needs and hard times, and I will trust that it will give me the best from his side, For that matter, we’re heading to an expert now (that I’ve totally forgotten how it’s done and how it feels) to consult him about our relation, and what’s the best for us to have what we need in our raw condition. So wish me luck because I have a new lover now!

*Like you see in the image, I’m a brunette, but in a city of black to dark brown heads, I become a Blondie which I don’t know if I love or hate, don’t care actually, but that’s always the equation here.