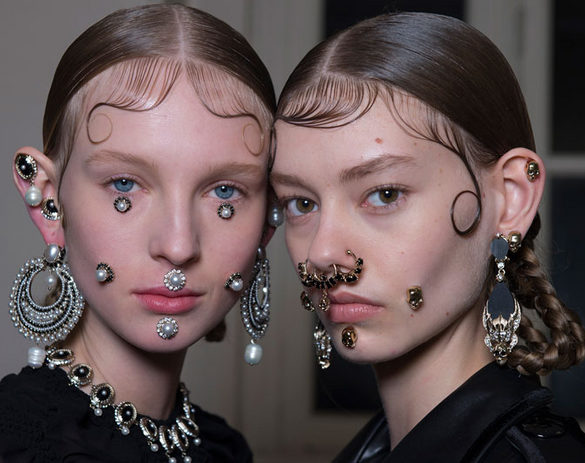 Riccardo Tisci always thinks out of our boxes. We know that we were going to see a really good show before we live streaming it, and the faces this time was no exception.

To be completely honest with you, I’m not a big fan of face jewels, yes I once pierced my nose (I discovered that I’m not Daria), but that’s it for me, I don’t dare to pierce any other part of my face, but I really love to see cool people doing that, it adds to their characters, like it’s your silent message you send along side with what you wear everyday, but sometimes, people just copying and that’s when I hate it.

However, that doesn’t mean that I’m more than in love with this face jewelry that I saw in Givenchy. Dots (I think inspired by indie jewelry) were put structurally at the end of the cheek bones, under eyes, statement on the ears, and between mouth, I mean how there’s a nose earring in a mustache shape that gives you both feelings of feminine and masculine at the same time, ha!!? That’s the paradoxes of my life.

And I won’t dare to ask you would you wear that on your regular day or not, but think about this for a moment, wouldn’t be so damn liberating if you act like an Indian strong/ cool woman for one day!?

I will respond with a big yes this time. A fine dot on the face never hurts.