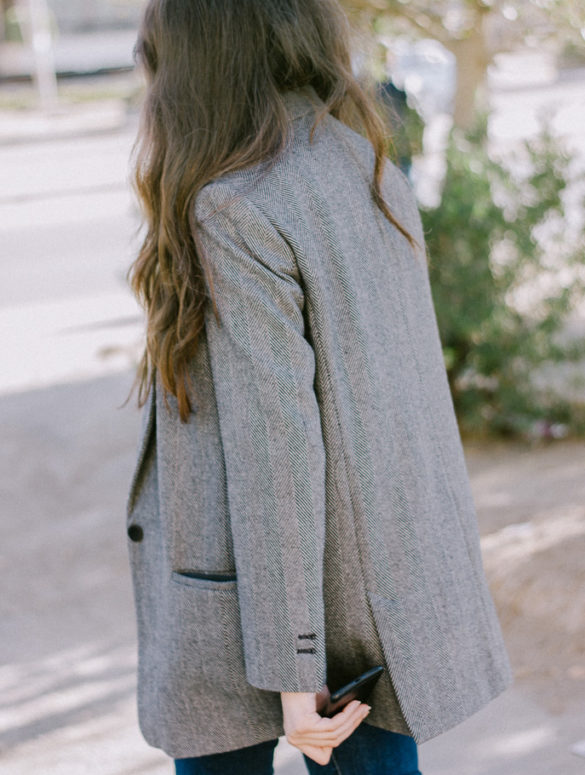 How to Look Like A Parisian Without the Intent to Be One?

Home
Fashion
Outfits
Outfit Ideas
As I’m setting in my couch watching the sun to set, preparing my meal that I did done myself yesterday from scratch—I couldn’t be prouder, and yes I will, of course, post about it just wait for it!—I’m also thinking about the title of that post while I’m finishing the edit of the photos, torn between how to dress like a Parisian or how to look like a Parisian and I settled on the one you see in particular because as you might have got sick of the subject itself, I, on the other hand, have been thinking about since forever now. The Parisienne… the allure of their style, the trend that we as non-Parisian—nor we ever visited Paris— dreamt of mimicking without minimizing its essence—the attitude. 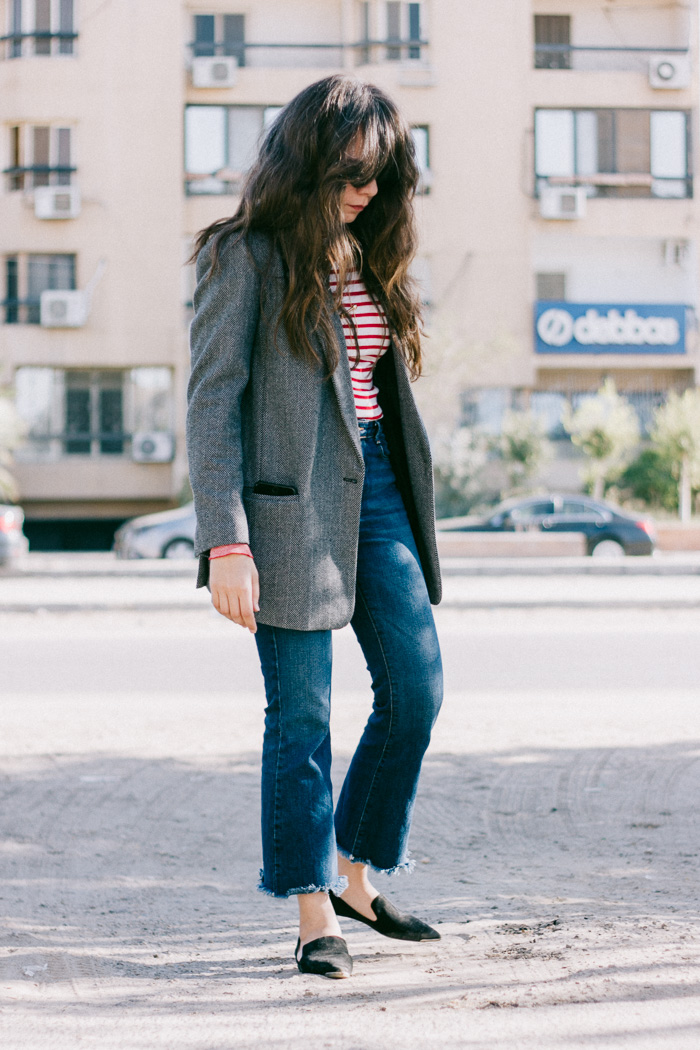 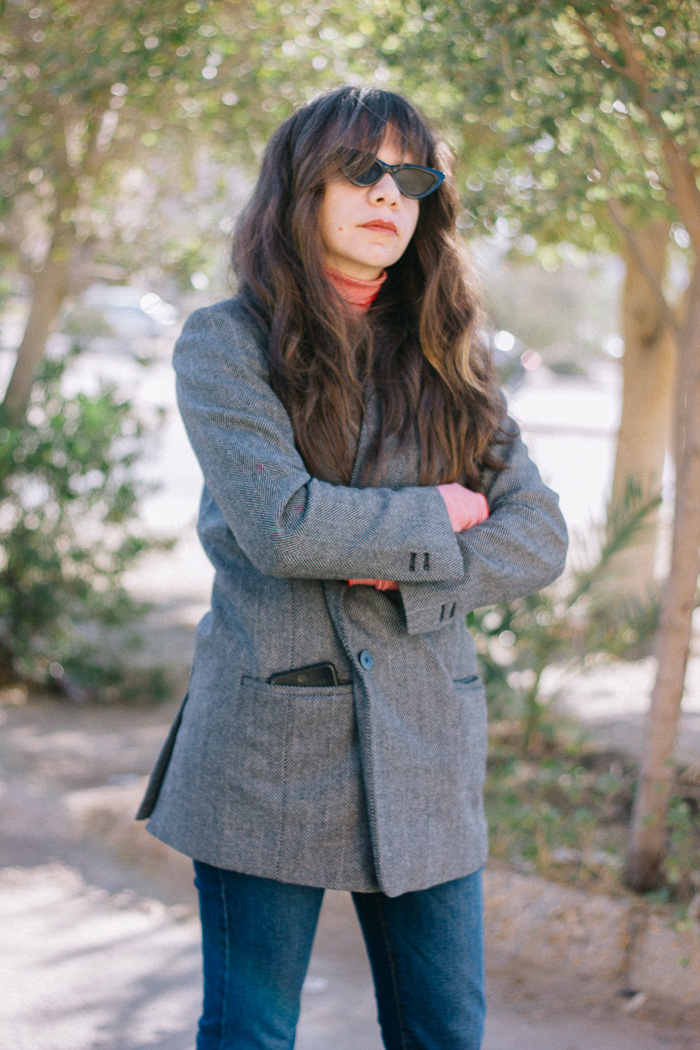 But the truth at least for me is this, I never got sick of Paris! Never will be! We might have gotten sick of everyone talking about it even the French people themselves like yeaaa we got it, It’s French!!! Maybe I’m sick of the same damn thing see it over and over again. But the simplicity, the old vintage style of Jane Birkin that I could just copy today, all of it, that menocore trend that is not a trend but also a trend in a more settled way you know…

How to be French?

So after my affection, let’s be honest about it here and now. Are you or are you not still following Rouje and Camille on Instagram? Both are French regardless that one is a brand and the other is a cool human being, both show you every day how France still bringing the best inspiration and you still love the nonchalant they carry. Another one, Are you wearing a beret now? If not, don’t lie to my computer writings that you didn’t think about buying one this season and at least for a moment tried it. So as a conclusion, I’m being honest with you and myself here. I didn’t get over the Parisian style, I’m just doing it differently now… And to achieve that in a more French way, would be like without mentioning that it’s actually French! So the steps of Not being ***** are: 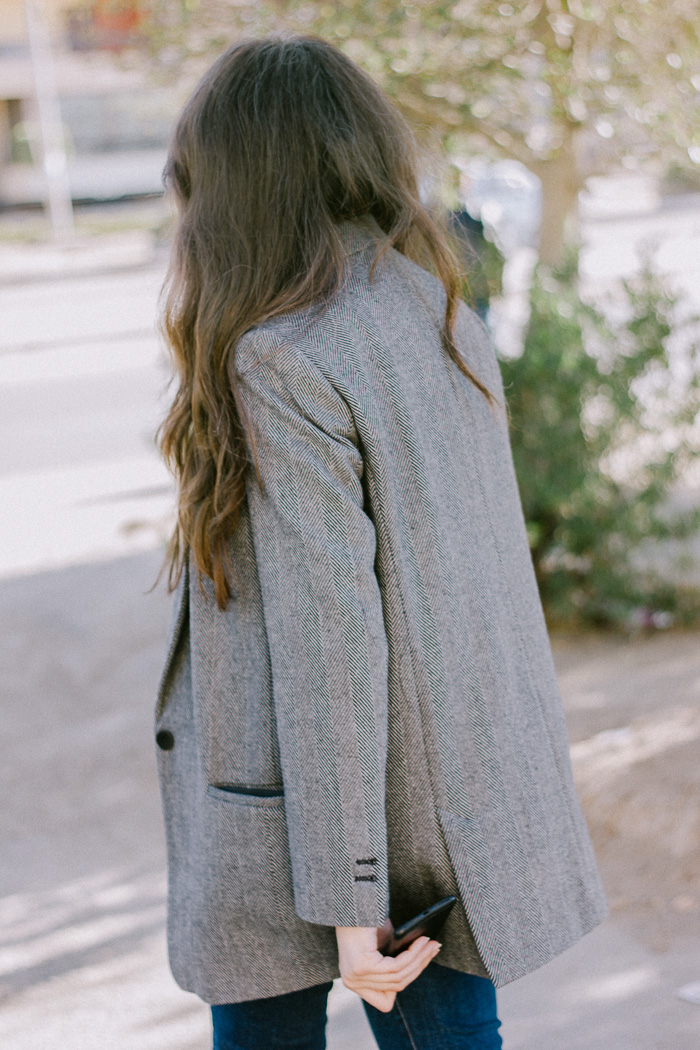 Check blazer is key for being not French this season. Everyone forecasted this blazer as the trend this fall ( they also didn’t say it’s French, so it looks so French!). I love how you could wear it all the day every day, pick one from your dad’s closet that’s even cooler. I found mine at Zara on the sale of last Winter and here I’m wearing it every day with loafers at mornings, boots at night. It could be your new coat seriously. 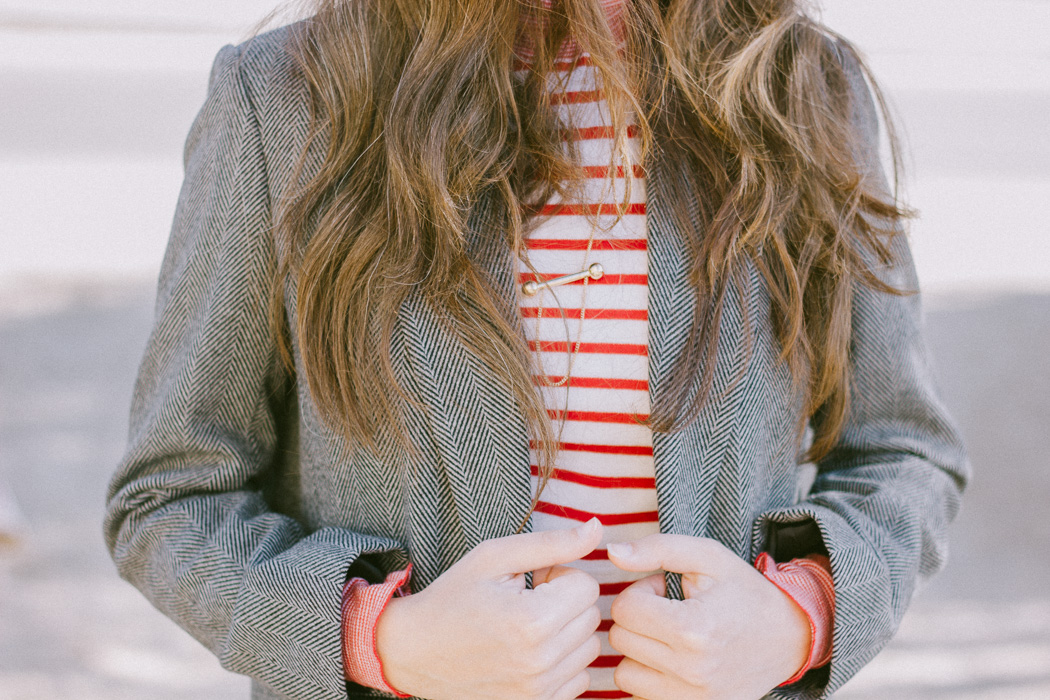 Sweaters Because You Know It’s OBVIOUS

A rule followed by the aforementioned blazer is a fitted sweater underneath in winter. A light top or vintage T-shirt as a substitute at Autumn/ Spring et voila, the top section is so finished. Done. Over. Bye. 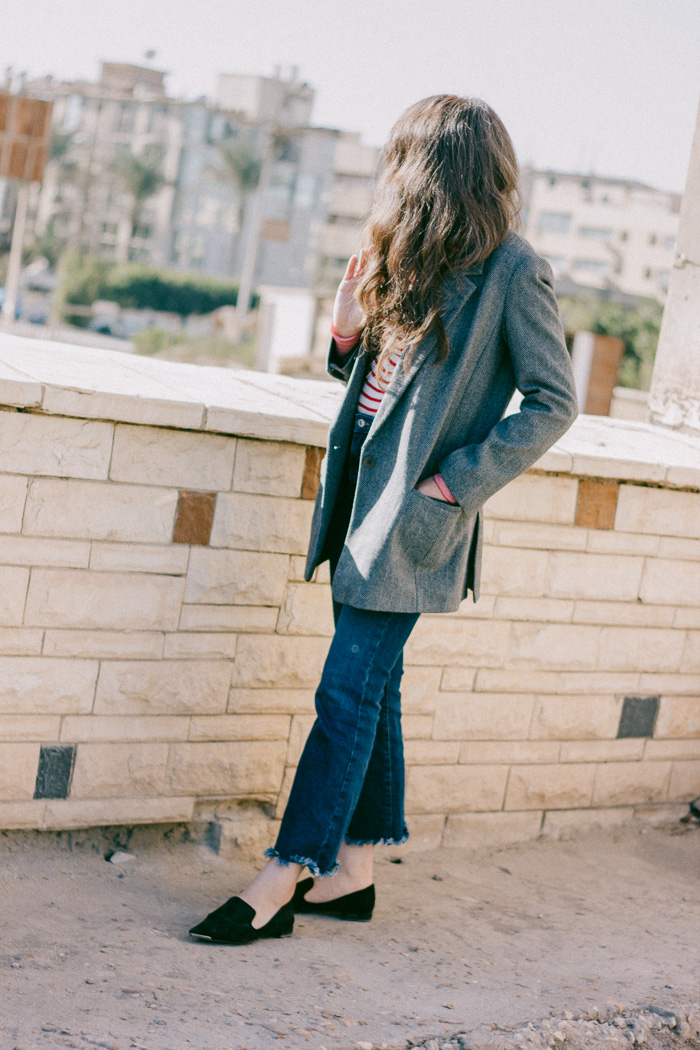 Bottoms Are The Hardest Science

That you can get in a second. It could be a flared jeans (I prefer white/cream colors on some occasions), A velvet wide leg pants in rusty colors would be great. The world is your bottoms. Anything would look great, think about it, long shorts oh oh seriously long short would be just amazing because now we could have an American/French style combo that looks so paradoxically amusing to my eyes. Mini skirts that are at the same hight of the blazer dresses that would make look like skirts! Nothing you can not do, nothing, nada. 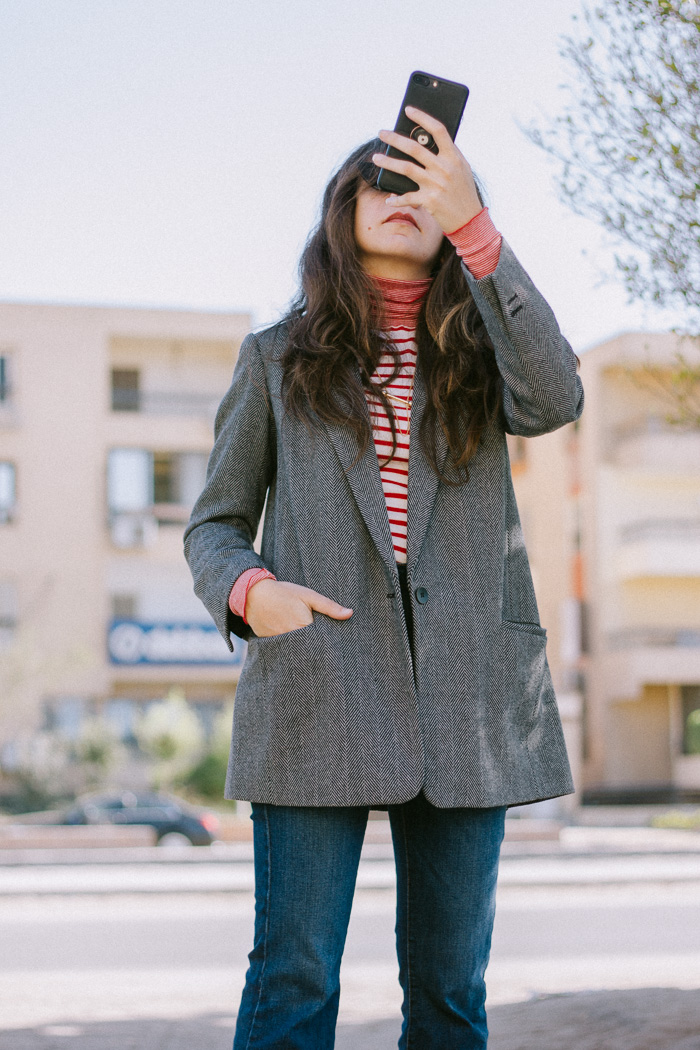 If we’re gonna talk about shoes at this time of the year, my head will go directly to Manola’s! Muleeees oohhh dear god I just can’t talk enough about that, flat or heels. But if we cracked the bubble that I’m living in now (it’s more of an eggshell) we’re gonna talk about winter shoes, boots with winter socks, loafers with socks. Also there’s no rule in here you can dress in whatever you want until you’re warmer. Like you didn’t see all of that coming. It just happened. 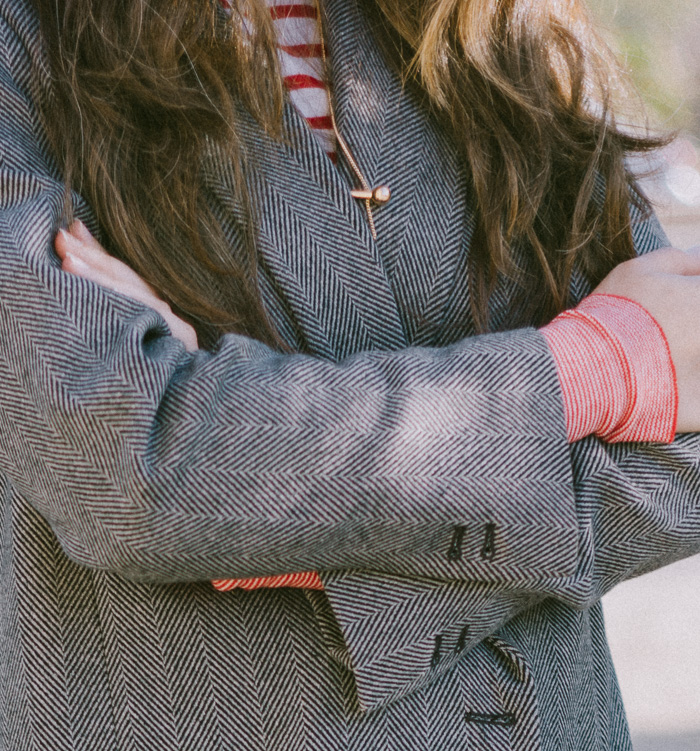 Low Key Accessory That You Never EVER Forget About

Always think about your necklaces like it’s your third arm.

And sunglasses are welcoming you with open arms (including the new one) into the future that you want as much as, even more, this old French style. Kisses, x’s, bisous. 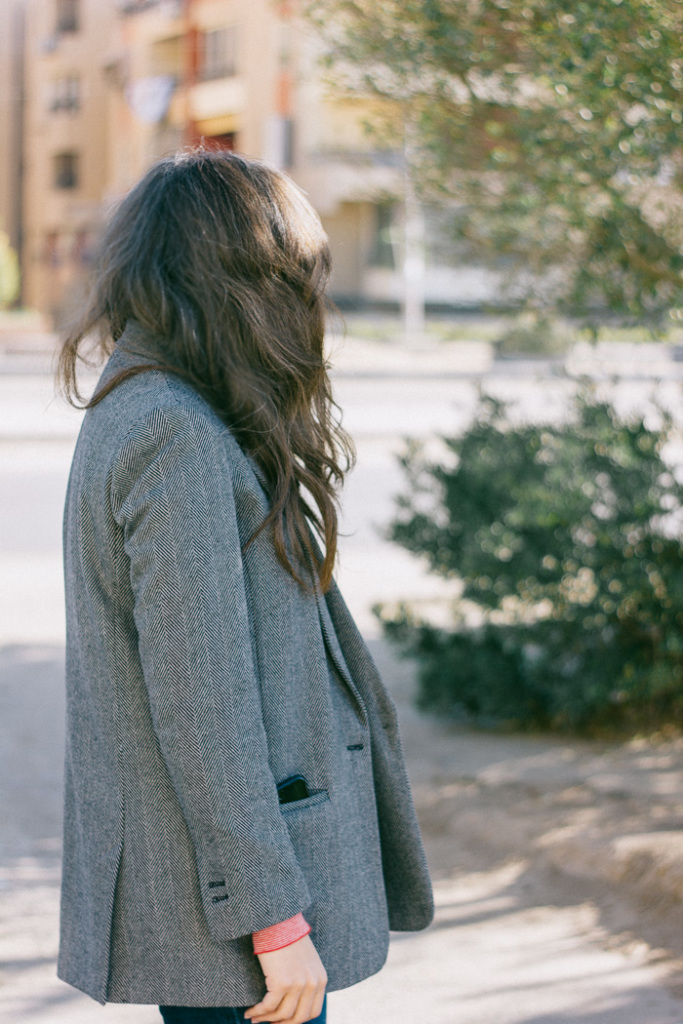 Did you think that I’ll forget about it!? Neuuu neu neu, you can do it yourself, by the way. At least that’s what French people and (I) do it. And now, we’ve officially changed that title to how to dress like a Parisian. Or even how to exactly copy a Parisian style. Ok, I will just leave it like that because it’s a paradoxical blog anyway and that’s the essence of it. Now to you, how French would you get?

Previous
I Like Glitter Makeup, But I Love Glitter Eyeshadow