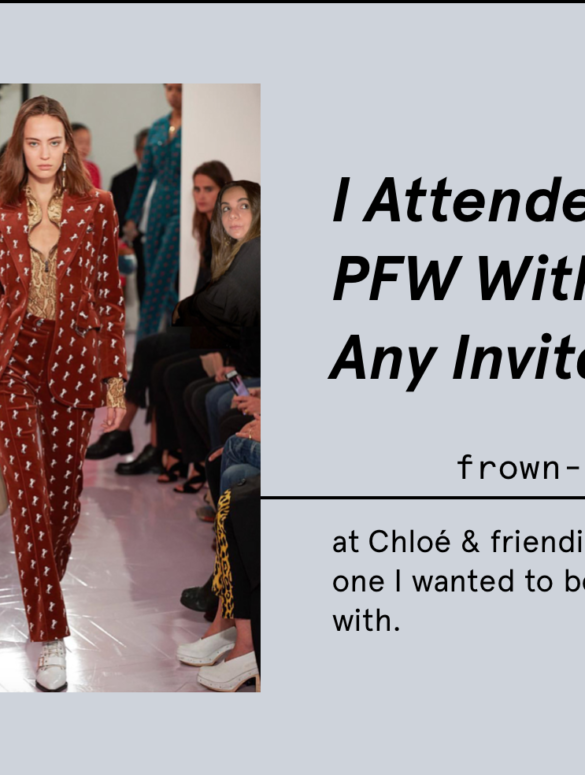 I Attended PFW Without Any Invitation

I’ve imagined going to PFW for the last ten years, and each year, I mean season, the chances for attending earthier go to waste for a reason or another, or I lose hope in myself getting serious in this industry, and watch it all happening on my screen, and the later always win the case.

But maybe this is what’s all about then, maybe because I never dreamed this thing that much. I’ve never had a vision about it to actually make it happen. Because if we thought about it for a moment here; What if I’m already there? And if I’m really there what shows will I be invited to? What shows I’ll sneak to? Who am I gonna be friends with? Is there such a thing? Where am I gonna stay? And with whom? Where am I gonna dine? Is there time for that! Who’re the people who will work with me? Am I gonna kill in meetings? Am I gonna be invited to any after parties? And if so am I gonna be free to go!? What am I gonna wear in all of this? What’s the feel of it!! Being in Paris? Your dream city that you wanna not only go there to attend a show but live for some time!

Since I don’t seem to have any clue what’s like to be in Fashion Week especially Paris, even if I saw it like a hundred times. I’ll imagine it all my own way here from Cairo. Just because I’m not at PFW doesn’t mean I can’t be, besides, it’s never not FUN to imagine and that will get me there one way or another. I’m just sure of it. Let’s begin with every detail, shall we?

First things first, let’s imagine that this blog is now finally well known among fashion people and I’ve got my first invitation to my first fashion show and it happened to be by Chloe, and yes, I’ll only go to Paris for that show only because I finally will communicate with the people that I’ve always dreamed of meeting.

I’m packing a small bag that has everything that I never get a chance to wear on my regular days, but now because we’re talking about fashion week, I’ll go the extra mile and wear them all. Even if it’s just for one day only.

I landed on Charles de Gaulle airport in the first hours of Sep 28th, a day I’ll never forget. I dropped my stuff at the hotel room which was so Parisian, not like what I see in pictures because the real feel is just something else. I couldn’t sleep because I was so nervous about what happened to my skin on the other day when I woke up to find that I have a skin rash from nowhere, but I guess that happened because I slept on dirty sheets (that looked cleaned to my eyes) on my last trip to Rad Sedr that I took right before Paris to get the sun-kissed skin for PFW sake, bad timing, I’m still learning.

I did a scrub which I don’t know if it’s a good or a bad thing in this condition but did anyway, then clay mask it, watched GG —do not judge, I’d watch it forever— and did my nails in the meanwhile. Afterwards, I finished my feet with my homemade Rosé for the rose éclat that I just needed on any exposed rough skin —including knees and elbows. I washed my face after and applied a thick layer of the light glossier priming moisturizer to sooth it a little and to prime my no-makeup makeup I attend to apply.

The stress level is getting up by seconds, and I feel a slight migraine from it. Because of that, I felt that my no-makeup makeup strategy will not gonna work and I have to put some effort there, so I tried to do some shadow on my eyes that indeed didn’t work so I tried to remove it with moisturizer because I forgot my makeup remover in Cairo so my eyes turned to heavy smoky slash panda look. I quite liked it even if it’s not so in fashion right now. I thought that it’s too much not only for my taste in makeup but for a Paris morning, but then I remembered, it’s fashion week.

I changed four times before I settled on the outfit  —the code is three changes for any fashion week, four for PFW— I took a ride to the Cholé venue and I arrived very early that they didn’t open the doors yet. So I waited outside and after a while I was bamboozled about the whole thing that is happening in front of me.

Why does my face always look so old when I’m in Paris? 📸@collagevintage2

I was at the same spot when Leandra Medine picture was taken. I waved at her and went to introduce myself. She already knew me because she’s been lately browsing my blog. I couldn’t believe what’s coming out of her mouth but I didn’t say such thing and remained my coolness. We went to her best sandwiches spot, something starts with an M, but I can’t quite remember because I was so absorbed by the glitters on the Chanel boots she was wearing. On our way to the Chloe show —that we highly anticipated as it was Natacha Ramsay-Levi’s first collection— she gave me such a conversation that I thought about before I sleep this night and when I woke up the next day.

When we entered the show, I and Leandra had to split up. On my search to find my seat, I saw everyone that I thought only exist through my Instagram screen. Patrick was there, Emanuelle, Anna and even Nicolas Ghesquiere (coming for her friend to support). I found my seat right next to Camille and Monica, first time I entered a show and I’m already first seated—move on. I compliment the way both looked —especially Monica’s hair and the Balenciaga red boots that Cami wore— and Introduced myself again —I had so much gumption this day.

I told them that we communicated before somehow on one of Cami’s Instagram pics that was about one of their podcast’s episode, Fashion No Filter that I admired when Omar Al-Sharif was mentioned by Mon’s grandma. They remembered me and that took us to the next level. They followed my Instagram account, and we went for an espresso after the show for a long chat about the fashion industry. Them as insiders, and me as an outsider taking it all in becoming one step ahead as an insider, so yea I was blown away. I ordered an éclair, I don’t need to tell you that it was the best éclair but you need to know.

The show was not like anything I felt before. I was on my tips digesting everything happening. The music, the first model to enter, that suit! I mean seriously that suit!! Who’d have thought that rustic velvet horse printed suit, with a snakeskin zip up blouse, all worn with white boots to highlight those horses could have this much effect on me!? I’m counting horses now to fall asleep.

I ended up wearing only one outfit, that I probably would wear at any other special day (I knew that this would happen). I wore a black Zara dress that has the new sleeves we all fell/ will be falling in love with the shape of it. I buckle it up with suede belt to give it more dimension and wore beaded flats because my feet were so swollen from traveling. I matched the dancing theme that’s happening on my feet with my bag for balance. All was Zara in the best way possible.

I ended the night with Camille and Eleonore which was also so nice and showed me how to pose in this picture. Je ne suis pas Parisienne in that. We laughed but I never took learning French more serious than this day. If in case I ever wanted to be Parisienne for a day, or ever.

I arrived in Cairo the next day and the work began to skyrocketing.

I laughed so hard while photoshopping those pictures. I think this content wouldn’t cross my mind if I regularly attend fashion weeks. I’m thrilled this is how I translated my struggle this season. Thanks to this energy, I never felt how this thing is possible and easy if you worked for it. So for now, let’s work our ass off, and have fun while getting there.

Next
What to Wear on a Picnic Even If It’s Held in Unusual Places?