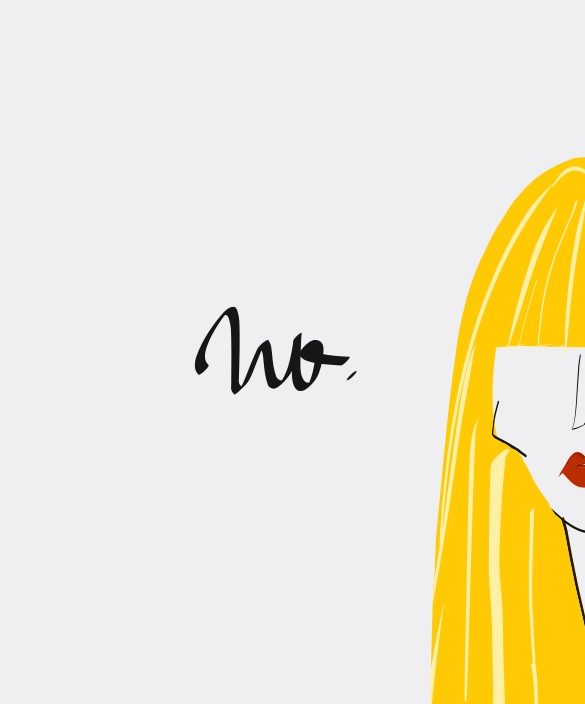 You know how things will go on this post, don’t ya! hmmm, if only I can know where to start with this, saying no, or learning to say no, or what I’ve already gone through because of this little 2 letter-word…

Remember when I said that I’ve to put myself first? I think mostly it’s because I don’t say no that often —In some situations, I think saying no is the safe side and yes is the more trouble adventurous side (damn adventurous side in me), it’s also how you choose the situations and on that rely the yes or no answer, with the question of: Why I’ll do it and what it’ll come for me from it? it’s just because we’re seeking adventure that much in our life and the experience of the unknown we forget how to say no on its positions, like saying No to:

I’m the most fashion critic in my head, it’s the most word that I’ve been using since I was born when it comes to fashion, when my sister comes to me in the store with a top in her hand, No is said before she opens her mouth, my bro the other day send me a pic while he was shopping and was taking my advice in a shirt  that he already bought and I was like: No, just return it I don’t care! No, neu, Nooo! in every form and shape, like are you kidding! seriously! I mean… even only with eyes! happens every time I’m watching a new fashion show or a style that I don’t like that much on the streets, I’m still the most judging person when it comes to style and fashion and the different between both…

But this is just me with family and close friends, on the other hand, it’s heart melting when someone I don’t know approach to me in style advice or take my personal opinion on his/her style, it’s a major thing for me and I always respect to not fully give my style as much as what reflects more of her style and how she wants to be translated, but there’s some certain things that I just have to say no to it, but with the other words! it’s hard but laughable at the same time, harder when I’m with a group of friends, some I meet for the first time and they take my advice on some pieces, then I be like, … yea… it’s hmmm, good but if only we can remove that gold beading thing…, and her like, What beading!!!?? where is it!! it’s just me, details freak, but if we summed those noes in one category, it’s be the easiest no of all, right!

Too Much Favors/ Chances

When someone has figured out that you won’t say no easily and just use that against you, I mean really! do you think that I don’t know what you’re doing! you can do it for them once, twice but its frustrating and for me it’s the straightest No on the face with all the right to say it.

The same when it comes to chances, I give you a gazillion chance before I say the hell with it, I’m a patient person in this area and I’ll do what I can and always will whenever someone asks for help , but there have got to be limits (friends and family are excluded), and it’s the balance you make here for people to not walk on you, or take advantage of you will make you say no on its right places.

The manipulative ways that it can put me through —yes I know that we fight a lot when we talk fashion but we agree on the same rules at the end— how to say no comes with learning and practicing everyday, mind is the magnet of positive or negative energy/ thoughts and if I never say no to it, it’ll control me in so many levels, it’s the balanced life we try to maintain everyday, sometimes I fail to control it, and learn from my yeses, it’s the best to say no to it and be the controller, damn right, and sometimes I let it be in control because it’s the right thing to do at the time.

Saying no to it when it makes me sit on the couch till it shape me and be as lazy as… well the couch actually just doing its job unlike me, I’m lazier than the couch itself, here when you say no to a certain lifestyle that your mind/emotions can put you through, and keep saying the hard noes till you get up and do what you have to do! Is it just me who’s struggling in this!!? Please say no.

I think that whatever I’ll talk about, will be the hardest no of all time, when feelings get into the road —which between you and me, the best places for noes is here people, noes are made for this mostly, the most you say no, the quicker you’ll have what you want, eh! ;) but who’s applying anyway!!— never an easy task, and here when you can give your mind all the free space to be in control (if there’s any), because if I let my heart win every time, I’ll be in… what I’m in now. No more talk please.

I think that every person has got there limits in this area too, or at least at first when you’re starting to like someone, like there’s a major Noes at every person when it comes to moves or attitudes from the other, whatever makes you feel like there’s an attraction or say no to the whole package! Fair enough. here become the #easiestNoever.

When I said no a lot of times, in fact more than I said yes, because for me it’s about the authenticity of this blog and how I see it evolve everyday without sacrifices, it’s like the quality not quantity equation but on the financial side, and I’m satisfied that way, it’s how you see it all and it’s your choice after all, you know the best thing for you, and for me I only trust my instincts. Saying no or yes professionally could be awkward but if you took the professional attitude will be a piece of cake.

And do not regret something from saying no, there’s always that time or that chance that would be waiting for you and come slap on the face and make that whole noes worth nothing, or the lesson you’ll learn and start over.

After all life is a bitch and I’ll only learn from my yeses and noes.

For you, what are the most difficult Noes you face everyday?