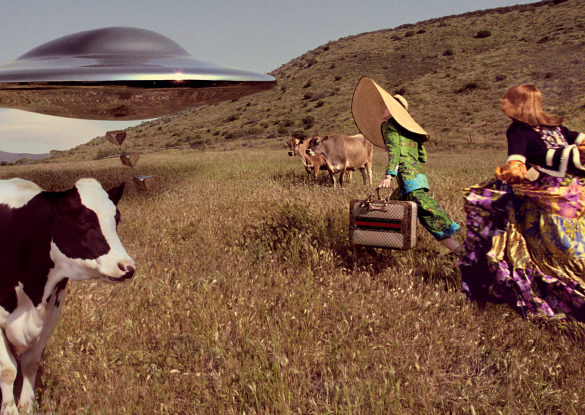 This Gucci FW17 Campaign is Rocking

It was 3 am when I finished iron my hair because I missed how soft and untangled it could be. I took a look at my Instagram after finishing a chapter and a half of The Catcher in the Rye.

Gucci appeared as a first photo as if it wanted to tell me, here I am, freaking you out one campaign at a time and provoking you again to make you wonder. It was the gucci fw17 campaign #GucciAndBeyond and if I could explain it in the most ironic way here’s how: It is as if the Star Trek was in much more cooler wear. As if alias were so impressed by our style on earth in the 70’s-80’s that they cat-copied it. And as if we were leaving the mother earth in the most stylish way possible. The paradoxes of each scene are perfect.

According to Gucci way, “This season the collection is transported to a parallel universe where a mixed cast of humanoids, aliens, robots, and earthlings unite for the Gucci invasion from a galaxy far, far away.”

I’ll be in this cast at any time now whether you want me or not.

My sister was asking me about the meaning of editorials in fashion. So I showed her the Gucci campaign, she got it at a second glimpse. That’s success in my opinion. I, on the other hand, someone who’s thinking actually of editorials every day to make from home, saw a series of Instagram posts by Gucci in April and thought that it was going to a place that’s little too much for me. That shows you how little do I know/feel about editorials.

If the campaign fits the vintage sci-fi world; and if we look back at everything we wear now, seriously copying the 70’s, 80’s, and 90’s; then this will fits nowadays perfectly. This is all what I want to wear at this moment— a proof of a successful editorial according my algorithms. What do you think?