A Visual Grid To The Style Of Hend Rostom

Every weekend, it became a habit of mine to watch an old Egyptian movie or two in the morning. Egypt started producing movies in 1896. In the 1950s, Egypt’s cinema industry was the world’s third-largest.
Unquestionably, there is a full history to discover from these movies. I particularly love to watch female lead movies, There’s that magic you can’t dismiss. And always share Instagram stories about the little details that blow my mind while watching. Then I get obsessed with the character and screenshot some snippets, and images of certain looks, emotions, and sets.

Last week, I was watching a movie starting Hend Rostom, when I was struck by one particular look of hers. A men’s gallabiyah styled with one of our traditional attires, The Millayah Laff —a traditional wrap that was worn in the 1930s, 40s, 50s, and the early years of the 1960s by Egyptian women of all ages. The Millayah Laff garment ranged from cotton to silk and wool. And typically, it was worn over western style dresses. 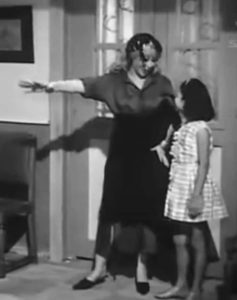 In Hend’s scenario, she paired the masculine galabeya with one of the most feminine, maybe even alluring pieces at the time, the Millayah Laff. This clearly created a very original tomboy style. Add to it her western-influenced blond hairstyle. So the overly detached outcome was astonishing for me. She might not be the first woman to create this look. But it was the first time I recognized it. One movie led to another, and I found myself making a big folder of her looks in most movies, and sharing it here as a fresh take on the vintage Egyptian style.

Hend Rostom is our version of Marilyn Monroe. Seriously, she was named “Marilyn Monroe of the east”, she is considered one of the seduction icons in the Egyptian cinema and known for her elegantly sexy roles. Hend started her career at the age of 16, but her first true success was in 1955 when the famous director Hassan Al Imam offered her a role in Banat el Lail (Women of the Night). My favorite movies of hers are Ibn Hamidu in 1957, La Anam (Sleepless) 1958, and Sira’ fi al-Nil (Struggle in the Nile) with Omar Sharif and Rushdy Abaza in 1959. Hend was a strong figure. She never did a biography about her life, the actress stated that she refused to sell her life as a means of entertainment and felt that her personal life was of her concern and no one else.

Next
These New Cocktails Will Be Your Favorite